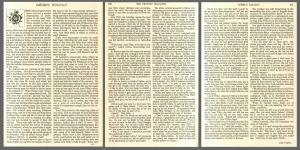 A note on the transcribed text:

“Ozème’s Holiday” was published in the August 1896 (52.4) issue of The Century between Marianne Manville Pope’s “A Day in Tophet” and an editorial written by Gilder titled “The Portrait of a Public Enemy.” Other notable contributors to this issue include William Dean Howells and William James.

“Ozème’s Holiday” is an interesting inversion of the late-nineteenth century literary theme of unequal power relations between black people and white people. As Emily Toth rightly points out, “Magazine editors in the 1890s, all of them white, liked stories of unequal relationships between blacks and whites — in which, for instance, the black character suffers for his or her ‘white folks'” (Toth 169). In this story, however, we see a white character, Ozème, care for a sick young black boy in need: Sandy. While the reader does still ultimately get the affective redemption of a white character, this redemption comes via the redefinition of gender through the culturally feminized acts associated with care. This nuanced redefinition of traditional gender roles — and the subsequent suspension of racial difference in the story, for a moment — is somewhat lost on Toth, who reads this story as an example of a man caring for a woman rather than a young black man. Aside from the misreading of the gender of the characters, Toth still agrees that Chopin was participating in and experimenting with a common literary theme of the time: “[Chopin] tried one variation on the black-white devotion theme with Ozeme’s Holiday,” in which a young white man gives up his vacation to help a starving black woman. But that story still redounds to the credit of the white man, and the Century magazine was happy to take it” (Toth 169).

Susan Castillo argues, however, that race in fin-de-siècle Louisiana, and especially in Chopin’s short fiction, should be thought of not as an “essentialist, immutable classification, but rather as an apparatus in the Foucauldian sense of the term, a discursive formation responding to an urgent need at a particular historical moment” (59). She goes on to argue that in Chopin’s fiction, race can be thought of as “a metaphor that serves to inscribe, naturalize, and, occasionally, subvert power relations” (60). When Ozème gives up his vacation in order to care for young Sandy, he gives Aunt Tildy, a black woman who (unfortunately) is a variation on a mammy figure, a well-deserved rest of her own. Ozème stays up all night at Sandy’s bedside and cares for him, and helps Aunt Tildy pick cotton — a skill that he learns from her — until he has to return home. Ozème does keep this care a secret from the other men back at home, however. When his friend Bodé asks where he has been, You see, it’s ‘mos’ always the same thing on Cane Riva, my boy; a man gets tired o’ that à la fin. This time I went back in the woods, ‘way yonda in the Frédeau cut-off; kin’ o’ campin’ an’ roughin.’ like, you might say. I tell you, it was sport, Bodé” (Chopin 631). While normative masculinity may technically be reinscribed at the conclusion of the story, the acts themselves are still made available to the reading public of The Century.